HAVE A BROTHER IN THE CUT. WHERE THE WOOD AT? (GLOG class: Druid)

Bears. Trees. Rocks. Lichens. The wilderness, untamed by axe and plough. The darkness, unrevealed by lampposts and roadsigns. What's the point? Who could prefer that over the bustle of a great city? The clever rat, the mighty bouncer, the bold pigeon, the wise pickpocket, the kind opossum — these are your creatures.

Starting Equipment: Plain clothes, no jacket but an umbrella, mace (the spray), a wallet with some form of ID
Starting Skills:    1. Architecture    2. Animal Handling    3. Meteorology    4. Rumourmongering

A: Streetlamp Soul, Tread of Rat, One True Love, +1 MD
B: I Know A Guy, I Talk To The Wind, +1 MD C: Tread of Cat, +1 MD D: I NEED YOU, +1 MD
Streetlamp Soul: You are a spellcaster that uses Metropolis Dice, which are identical to Magic Dice in every single way imaginable. You roll a d10 for a new spell at templates A through C, and choose one at Template D. Your DM may reward you with spells-as-treasure at their discretion.
Tread of Rat: Choose two of the following adjectives: smoky, narrow, dilapidated, glitzy, shadowy, bustling, expensive, imposing, damp, loud, unwelcoming, shunned. While in an area described by that adjective, you travel without being followed, find free lodging (of some sort) for one person, and can guide one person (including yourself) through the area at double speed.
Every time you level up, select another adjective. Effects stack. Adjectives may be selected multiple times.
One True Love: You love the city, and nature's belly is filled with spite. You get -1 MD and -1 to rolls in towns, -2 in villages, -3 in dungeons, and -4 in wilderness, and your class abilities don't work. The latter two don't apply if it's inside a functional city, like a spooky sewer/crypt, or a park.
I Know A Guy: You know the way to every minor named character, around half of the medium-importance characters, and 2d3 important characters. There's a [template]-in-six chance that you've already met them before.
I Talk To The Wind: You may talk to either the wind, the roads, OR vermin. In all cases, their perspectives are strange and off-kilter.
Tread of Cat: If a human could leap a gap with a roll, you can leap it without a roll. If a human could climb a structure with equipment and preparation, you can climb it with your fingers and toes.
I NEED YOU: YOU CAN KEEP ME ON THIS EARTH. BE VIGILANT. I LOVE YOU. Oh, you have seen her in your dreams! and she has seen you on the crescent of the hill. Her wind-corridor heart, her hundred-thousand luminous arms, her body of sodium and soul of rain. You love the city, and the city loves you. Once per day, you may ask the city a question about a part of her self. Your answer will be in the cryptic purple prose of an utterly alien being that loves you very much.
Spells:
Mishaps/Dooms: No. Instead it works like Hubris, except, instead of you earning the City's ire, you begin to resemble it more and more, until you become so in-tune that you aren't human at all.
At 5 points, you're affected by a permanent chill, which makes you immune to extreme temperatures by virtue of always being uncomfortably cold.
At 10 points, you're surrounded by a halo of sodium-vapor light. You shed dim light in a 10ft radius with all the benefits and drawbacks implied
At 15 points, your mind begins to blur into the mind of the city. You cannot perceive yourself as an individual, only as a tiny part of a much greater whole.
At 20 points, you take a turn down an alley that wasn't there before, and isn't there anymore. You disintegrate into the genius loci.
at November 07, 2021

HAVE A BROTHER IN THE CUT. WHERE THE WOOD AT? (GLOG class: Druid)

Bears. Trees. Rocks. Lichens. The wilderness, untamed by axe and plough. The darkness, unrevealed by lampposts and roadsigns. What's t... 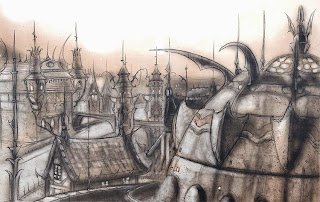